Who Is Terry Allan Christian? 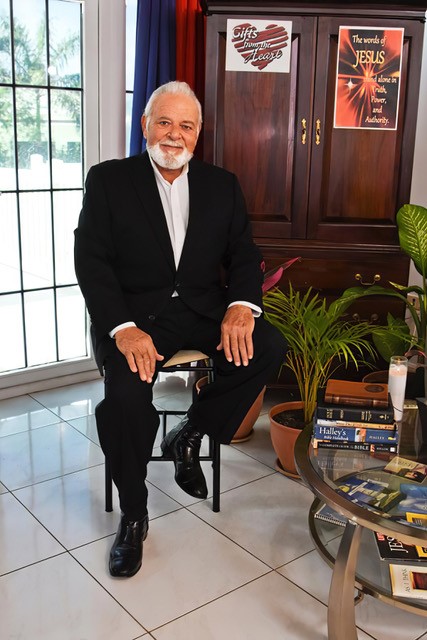 Since dedicating his life to Jesus at the age of 23, Terry Allan Christian has been reading the red lettered version of the 4 Gospels as recorded in the KJV Bible. Even though Terry reads the whole Bible, his primary focus is on the words of Jesus and the example of His actions.

Terry grew up in a violent dysfunctional family where he quit school at 16 and left home. He stuttered so bad he could only say 3-5 words in a row. His family and friends mocked him and that caused much stress in his early life.

At the age of 23, he had a near death experience and in which he had a dream. In this dream, he was told that one day he would be a teacher for Jesus. Needless to say, he was scared at first because of his stuttering and lack of structured education however, he always had a child-like faith and trust in Jesus as Lord.

After the dream, he was soon hired by the Dale Carnegie Organization and trained in sales and public speaking, where he met a man who taught him how to visually read. During the next few years Terry read several hundred books on the subject of personal growth.

At the age of 30, Terry became a professional Motivational Speaker and Executive Trainer and over the next 20 years he would deliver more than 2,500 presentations to private and public audiences across America and Canada.

Several years ago Terry retired as a public speaker after feeling the Holy Spirit redirecting his life. He was led to do what Jesus told him many years earlier. After researching the 4 Gospels he composed the book What Did Jesus Say: The Seven Messages from the Master, using only the Words spoken by Jesus as recorded in the 4 Gospels, without adding any personal comments or opinions.

As in all God called missions it took longer, cost more and challenged him to the edge of his faith. He would later say, he had to read the Book of Job just to understand why this was happening to him and discover if he was being tested or penalized. In the end, he was being tested and by the Grace of God, he prevailed.

Now after 12 years of study, obedience, difficulty and struggle, his book is now available in Paperback, eBook, Audio Book and Kindle.

Today, Author and Counselor, Rev. Terry Christian is founder of Foundations for Life ‘Online’ Ministries and presently lives Negril Jamaica where he does local missionary work in schools and churches while providing counseling worldwide online thru his program Christians Helping Christians.

Negril, Jamaica is where Terry went to fast & pray while seeking divine healing for Bladder Cancer. His doctors gave him 3yrs to live so he created a healing sabbatical and after fasting & praying, and walking the beach for 21 days, he returned to his Doctors and they released him ‘cancer free’.

Terry calls this program: The Life Walk –aka- The Miracle Walk and now offers this ‘restoration’ life program online or in Negril Jamaica for everyone seeking Life, Health or Marriage Restoration.

For more information on his Divine Healing experience, click here: The Life Walk -aka- The Miracle Walk : http://bit.ly/1WPQBHi

For more information on his ‘online’ ministry, click here: www.FoundationsForLife.org

WHAT DOES TERRY BELIEVE?

In his own words.

I believe: WITH GOD, all things are possible, all the time, wherever we live and at every given moment, when we pray, believing –

I believe, it doesn’t really matter if we’re a Baptist, Lutheran, Methodist, Pentecostal, Presbyterian, Catholic, or a non-denominational Christian, what really matters is obeying what Jesus Said in all we think, say and do.

Personally, I’ve reached my Conclusion in Christ. I’m going to obey HIS Instructions, ‘abide’ in His Words, ‘follow’ His example and ‘become’ His Disciple.

To Schedule Rev. Terry Christian for book interviews and speaking engagements in person or on radio, internet, TV and Skype:

Please call Helen Cook at 903-654-0938 or email at Helen.Cook@PrimeStarPublicity.com

Terry A. Christian | Create Your Badge

Get your copy of "What Did Jesus Say..." Today!